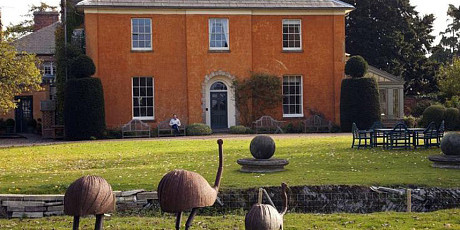 The traditional English country house hotel is a unique breed. Very much a post-war concept, it became popular amongst the growing number of city workers seeking rest and recuperation, and as the idea took hold, more and more private homes were converted into hotels by hands-on owners who specialised in welcoming guests into their cosy, personal world.

Francis Coulson, creator, in 1949, of Sharrow Bay, is credited with coining the phrase â€˜country house hotelâ€™, while other famous early examples of the genre included Peter Herbertâ€™s Gravetye Manor and Paul Hendersonâ€™s Gidleigh Park. Today, there are around 5,000: some remain resolutely traditional, others have successfully harnessed the more relaxed, chilled vibe that younger guests look for today. These favourites encompass both styles.

Gravetye Manor, just 30 miles from London, is one of Britainâ€™s greatest, and longest-lived, country house hotels and also one of my favourites. The new furnishings look elegant, fresh and attractive, but the feel of the place remains the same. Several million pounds have been spent on background infrastructure, and all 17 bedrooms have been redecorated, with new bathrooms throughout.

On the edge of the village of Evershot, in the heart of Thomas Hardyâ€™s Dorset. Decoration and style is the personal province of Beatrice Tollman and she tends towards the feminine and the flouncy. Here at Summer Lodge there are fabric covered ceilings and padded fabric walls, pictures of dogs, plenty of cushions and so on but they add up, in general, to a feeling of spoiling indulgence and do not, mercifully, overwhelm. The drawing room, designed by Thomas Hardy himself, is admirably classic in style, now painted a pretty blue, and the bedrooms are divinely pretty and comfortable.

Langar Hall stands in the Vale of Belvoir, next to the village church, surrounded by a mature garden and overlooking a series of medieval carp ponds. The gracious, charmingly decorated house still feels like a home, not least because of the number of guests who leap up in the dining room and greet their hostess, Imogen, who has a natural gift for conversation and putting people at their ease. The heart of the hotel is the restaurant, literally in the middle of the house, set back from the flagstone hall. Its reputation for unpretentious good food (“classic English with a twist”) holds up.

Just outside Midhurst, with long views onto a lovely wooded section of the South Downs, with not another house in sight. Surrounding the house is a neat croquet lawn, a pair of lawn tennis courts, a testing pitch-and-putt golf course and an emerald putting green, all perfectly maintained. The happy sound of children and of china teacups clinking against saucers wafts up from below. Inside, the tranquility and atmosphere of a family home are all still intact.

The core of the castle is late 17th century, but its bulk is high Victorian. The Danby family built it and aggrandised it, adding the 200 acres of parkland. In the late 19th century, mill magnate Samuel Cunliffe-Lister bought the estate and aggrandised it a great deal more. Decanters of whisky and gin sit on a tray (the first glass of each is complimentary), the bed is blissfully comfortable, the bath deep and the towels fluffy. The style is traditional and conventional, and the ground floor is splendid (the Georgian drawing room and Victorian dining room are nothing short of sensational). Some rooms look out on to the restored four-acre walled garden. It now produces all the hotelâ€™s flowers, asparagus and much more besides.

The fact that Gilpin Lodge is family-run by two generations hand in hand makes it special. There are flowers everywhere, charmingly arranged; a homely utility-room-cum-office has stairs to a light-filled indoor pool and sauna, and a terrace by the tarn with hot tub, outdoor heaters, deck chairs and private corners. Rooms are glamorous yet homely.

The hotel occupies a late Victorian house that when it was first built overlooked a small hamlet; since 1978, it has overlooked Rutland Water, the creation of which provided the Midlands with one of its most beautiful and evocative landscapes. The house exudes a feeling of controlled and carefully orchestrated wellbeing without ever feeling unnatural or overly theatrical. The flowing country house good looks are matched by the surrounding gardens and the beautiful view of Rutland Water from the lovely flower-filled terrace. The cooking of Aaron Patterson, who began here as a 16-year-old sous chef, trained elsewhere and returned as head chef in 1993, easily deserves its long held Michelin star and is rooted in local and seasonal produce, charmingly presented and always delicious.

Hunstrete House, a Grade-II listed country house dating from 1820 stands in the Chew Valley about eight miles from Bath, surrounded by its own deer park, and with a large kitchen garden that has now been completely restored and restocked. The hotel is part rural shabby chic, part comfy, part glamorous and part laid back without a whiff of starchy formality. Every object, from the simplest terracotta pots upwards, has been hunted down by the owners and, along with stripped floors, painted sawn timber clad walls, velvet curtains, chandeliers and cleverly mismatched rugs and fabrics, the result is grand yet informal, with not a jarring note. Most rooms are in the main house; there are four garden rooms that have great charm, and two enchanting Hideaway rooms in the kitchen garden. The cheapest Snug rooms are cosy and pretty, with the same equipment (such as minibars and Nespresso coffee machines) as the rest.

A verdantly gardened, Grade I-listed Eden between Dartmoor and Exmoor, with shell houses and hidden glades for romantic tÃªte-Ã -tÃªtes. Escapists, old-school romantics, fishermen and garden lovers visit Hotel Endsleigh. Built in 1812 as the holiday home for the Duchess of Bedford, Georgiana Russell, this wildly romantic, chintz-free country estate is steeped in royal history. The pace is unhurried, and the â€œmake yourself at homeâ€ atmosphere leaves you feeling like lady of the manor in no time. Purposefully low-tech, the rooms donâ€™t have televisions, Wi-Fi or mini bars, and only a couple have proper showers. Decorated in Regency pastiche, Room five is the winner, with original hand-painted wallpaper, poetry-inspiring views of the River Tamar and a chaise longue thatâ€™s made for swooning.

In the delightful village of Askham. The Hall, which dates back to medieval times, has great character and commands superb views over its gardens, the River Lowther and the fells beyond. A mixture of family furniture and paintings have been combined with more modern, or quirky pieces to create something both charming and unusual. The restaurant has patterned encaustic tiles, while the hall and stairs are given a modern twist with pendant lighting and arresting portraits by the owner, Juno Lowther. All the rooms are engaging and range from the highly unusual to the nicely different. Two favourites are the impressive Lonsdale Room, with a marvellous canopied bathroom and a view to Knipe Scar Fell and beyond, and Park View, overlooking the River Lowther and kitchen garden, with a modern glass drench shower, antique family sleigh bed, and charming table for two in the window. The whole place feels part stately home, part private club, but mostly unique.

Any cookies that may not be particularly necessary for the website to function and is used specifically to collect user personal data via analytics, ads, other embedded contents are termed as non-necessary cookies. It is mandatory to procure user consent prior to running these cookies on your website.